June 19, 2021
Armenian National Committee of America—Western Region
This certificate is presented to Silvia Foti.
For your dedication and efforts in combating denial of the
Holocaust, Armenian Genocide, and other genocides.
Signed by Armen V. Sahakyan, executive director. 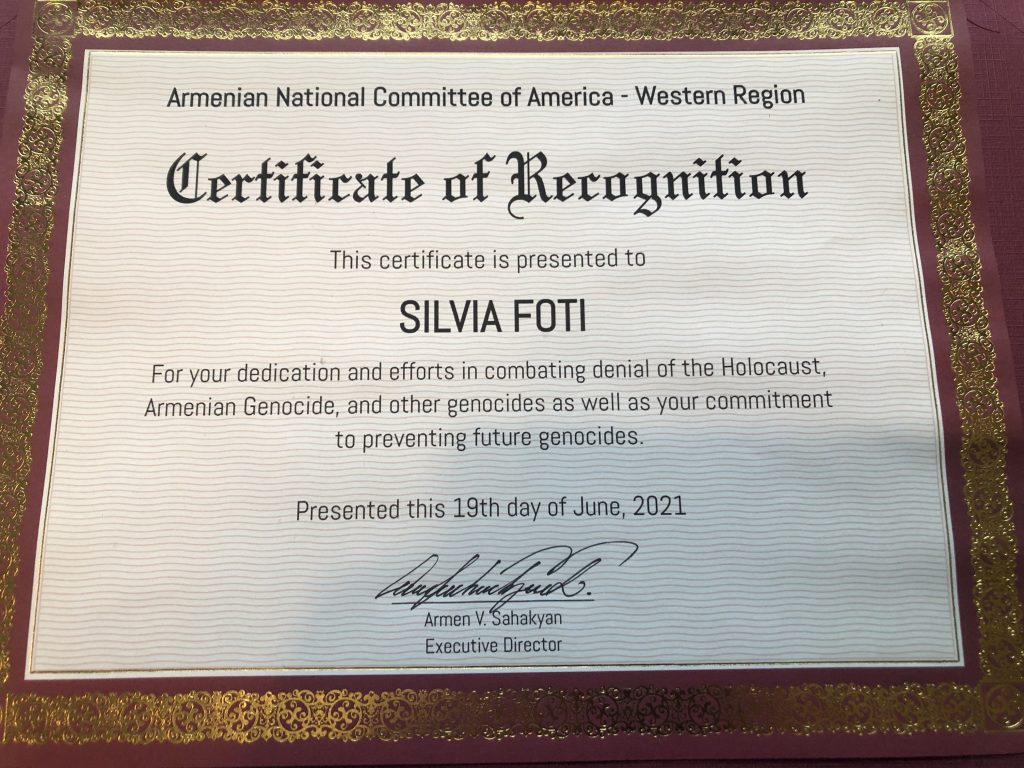 This certificate of commendation is presented to Silvia Foti.
In grateful appreciation of your dedication, devotion and
commitment to fight racism, antisemitism, and Holocaust denial
and for your outstanding efforts to support the prevention
of genocide.
Signed by Honorable Marty Small, Sr., Mayor City of Atlantic City. 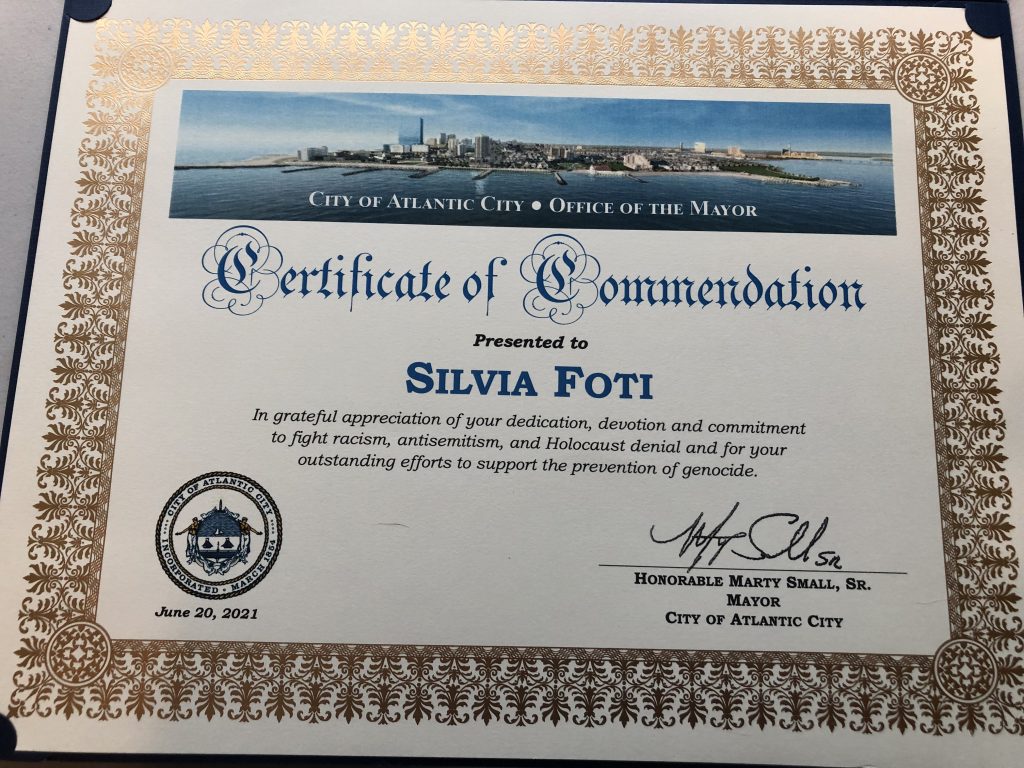 June 19, 2021
Congressman Brad Sherman
The flag of the United States of America. This is to certify that
the accompanying flag was flown over the United States Capitol
at the request of the Honorable Brad Sherman, Member of Congress.
To Silvia Foti. Signed by Thomas J. Carroll, III,
acting architect of the Capitol. 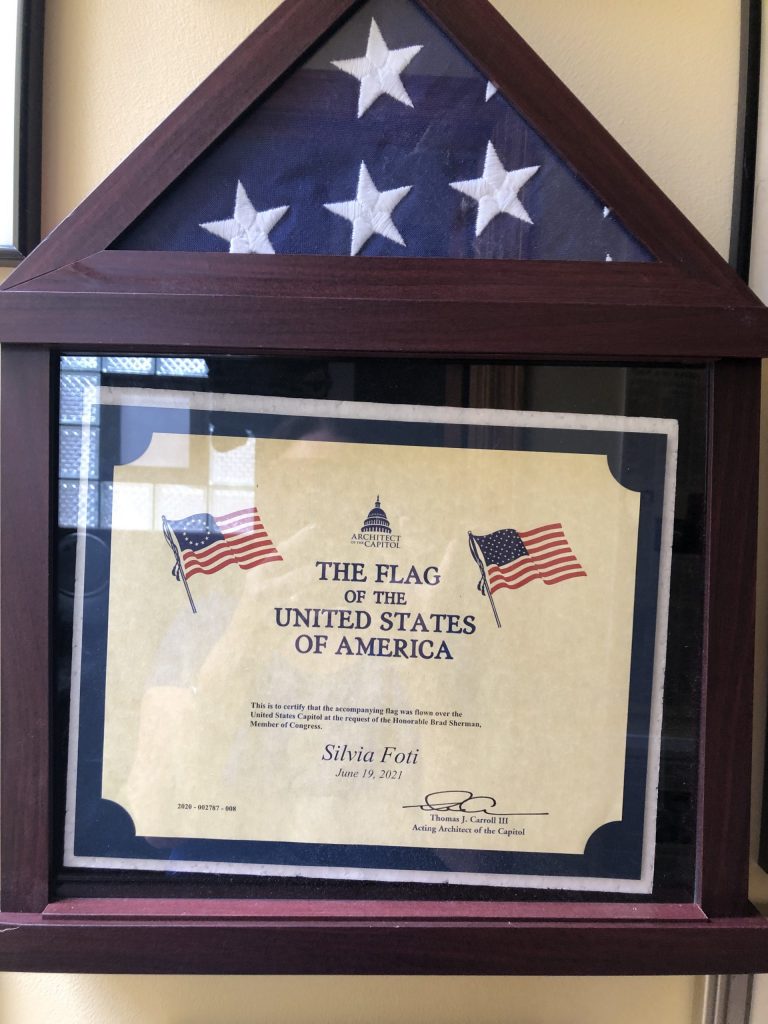 June 19, 2021
Shadow Minister of South Africa
Letter of appreciation and admiration. I knew you by name and
reputation way before I had read your book or had heard you speak. Our families share a history dating back to the war that few will acknowledge in its entirety. It was due to the brave and honest efforts of yourself that allowed for open discussion.
Unfortunately, we live in a time that should have seen us
progress from the thirties and forties and take us away
from ever repeating the mistakes of our past, yet a century
later and we seem to be facing an enormous rise in anti-Semitism
again. Levels of propaganda and the severity of it are considered
worse than Germany pre-war time. At a time like this,
I am reminded of the words from Anne Rice: “Evil is always
possible. And goodness is eternally difficult.”

In a world of fake news, social media and influencers, people learn from peers and not teachers. They get facts from social media and not an encyclopaedia. So, it is all too easy for people to fall for a populist sentiment or what is perceived as a populist sentiment due to biased media and mediums. The real heroes are the good people at heart that will still speak out against the intimidation, threats, and isolation in the name of truth and justice.
Silvia, please accept my admiration and appreciation for you being one of these heroes. Please keep up the excellent work and let your truth and moral compass guide you always. The world needs more people of your fibre because until we have truth, we can never have reconciliation and without reconciliation the world will never see peace.
Yours sincerely, Darren Bergman, MP, shadow minister international relations and cooperation; executive member of the SADC parliamentary forum (treasurer); member of the liberal international human rights committee. 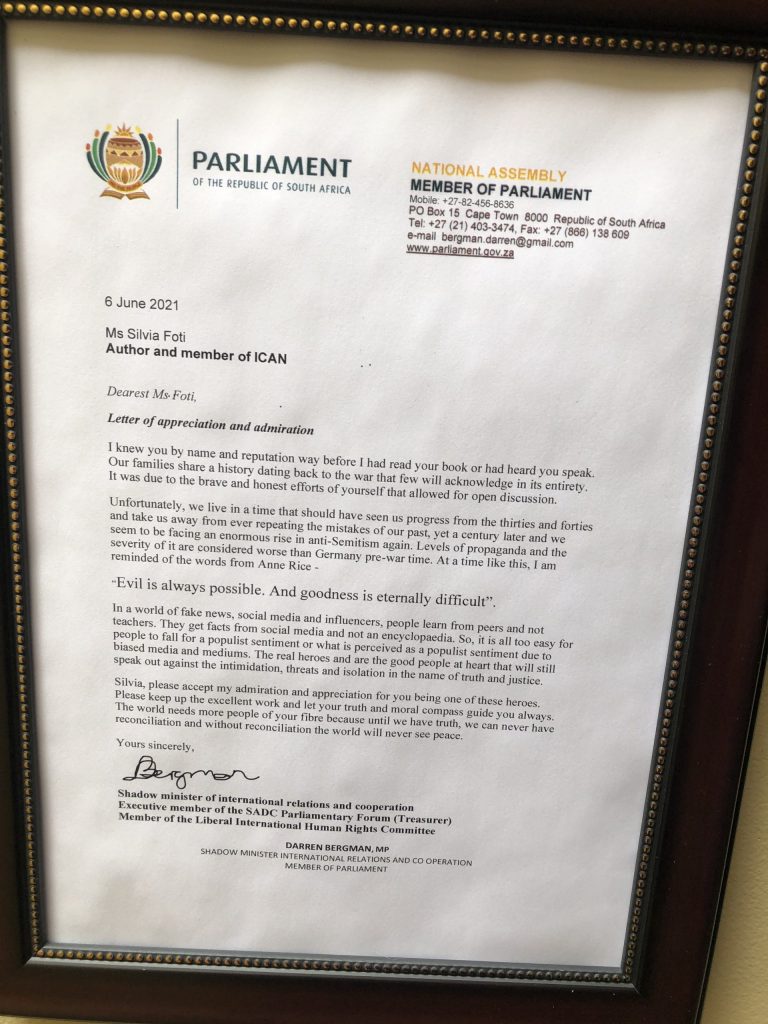 June 19, 2021
Temple Ramat Zion
A certificate of recognition and appreciation is presented to Silvia Foti. For her commitment to the truth and to preserving the memory of what happened to the Jews of Lithuania. Signed by Rabbi Ahud Sela; President Susan Lukenbill; Hazzan Daniel Friedman. 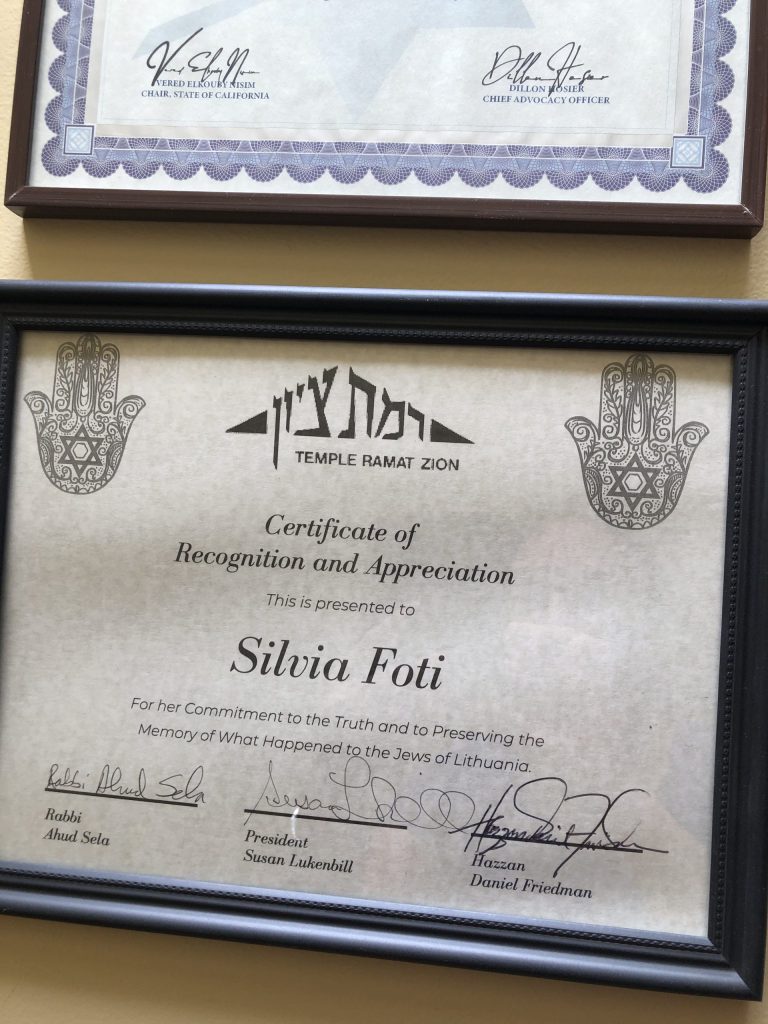 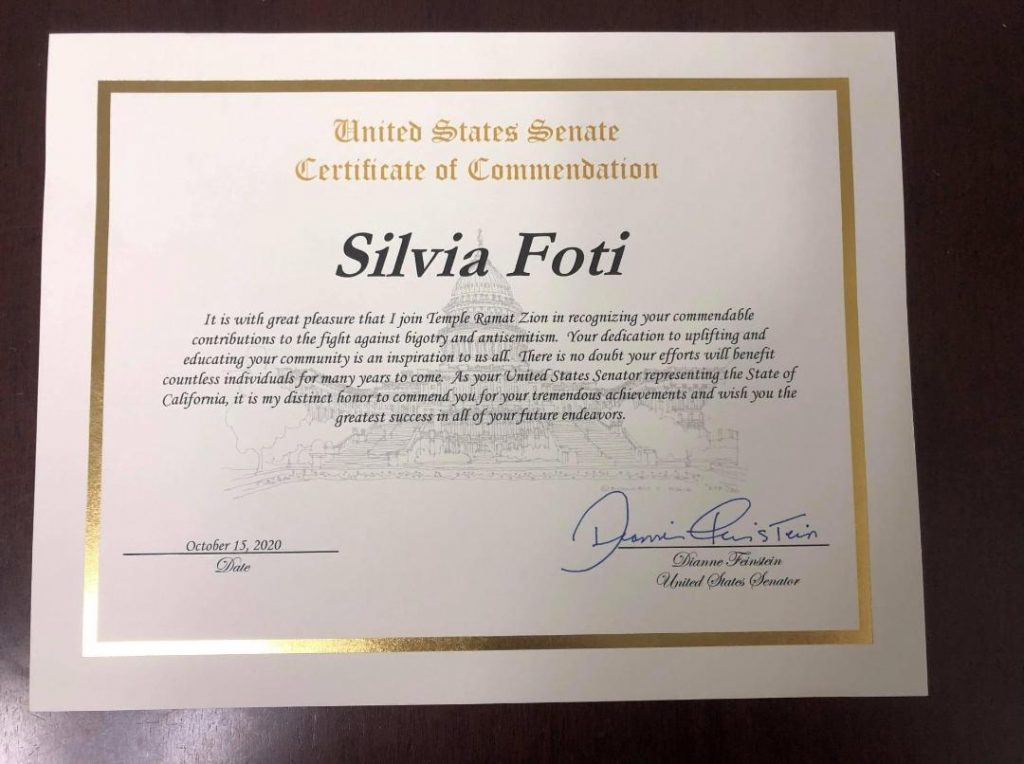 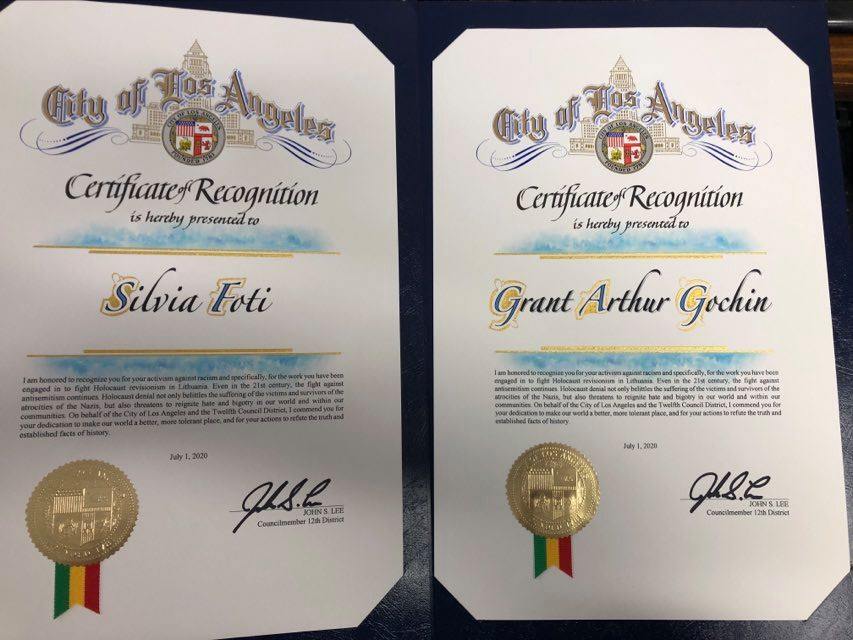 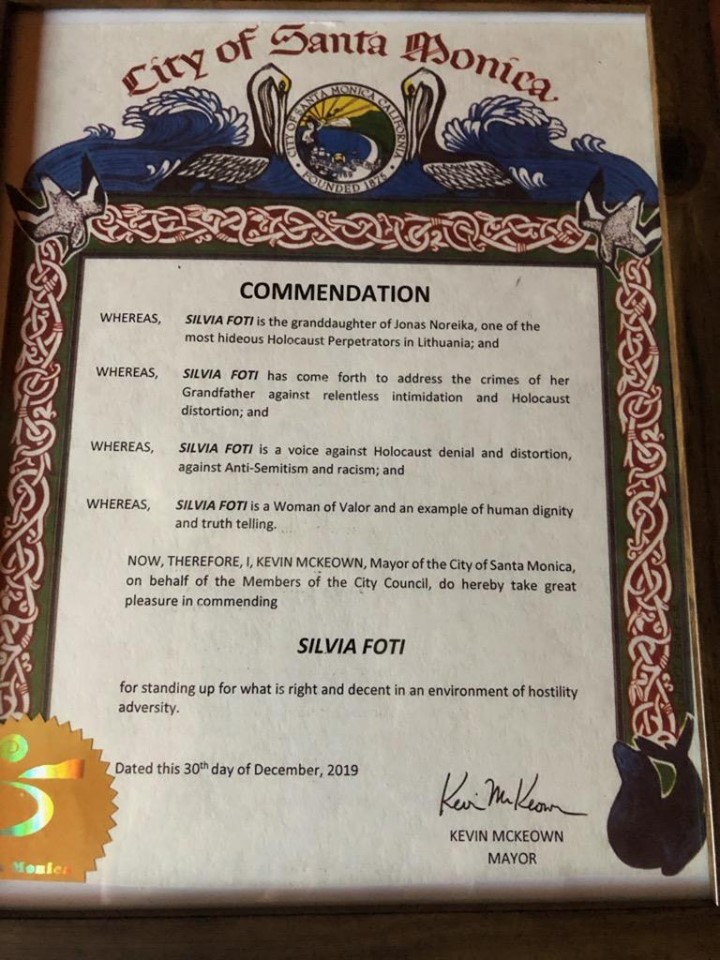 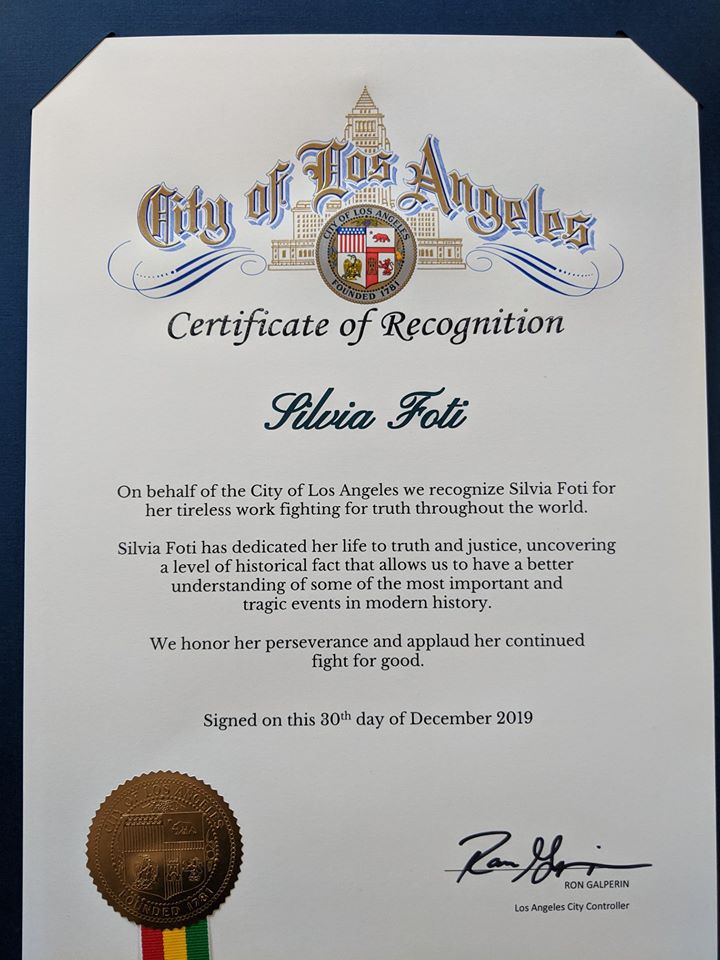 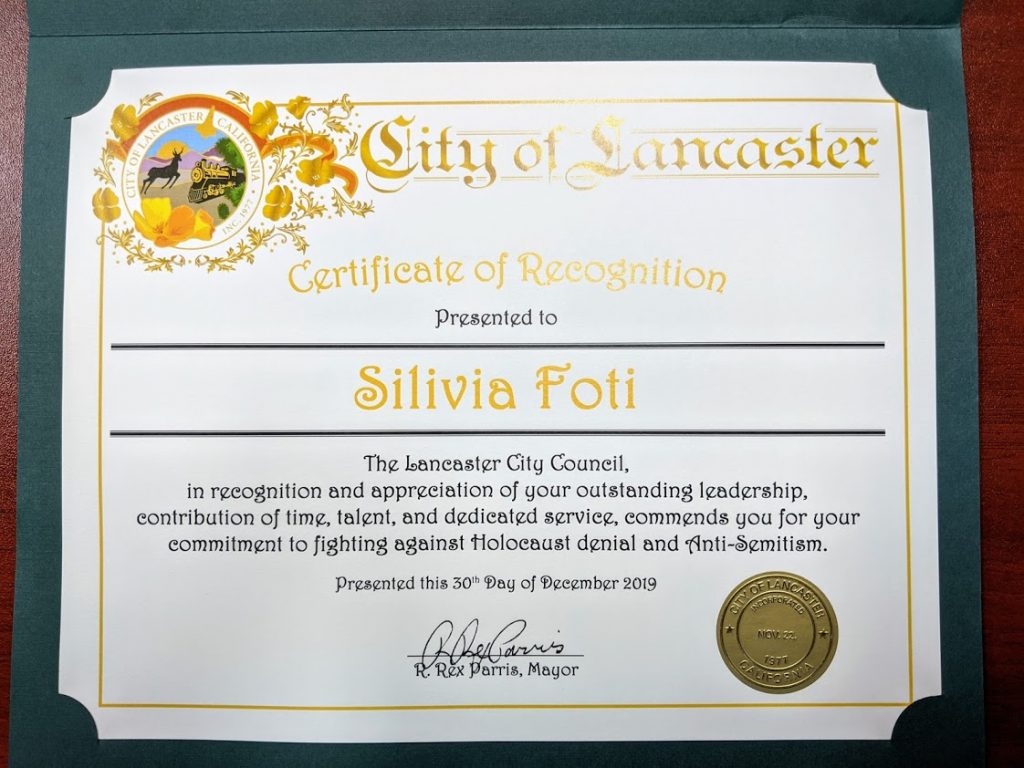 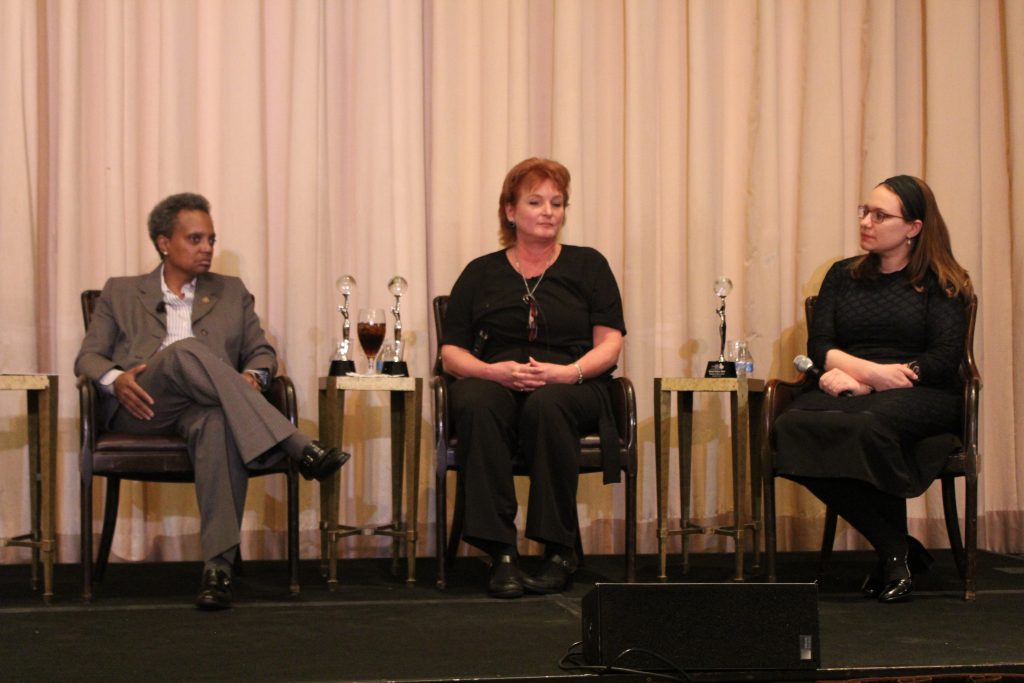 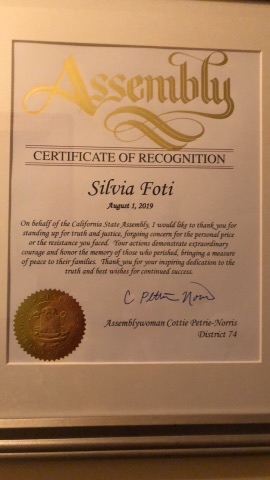 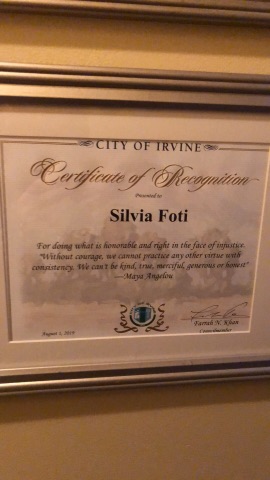