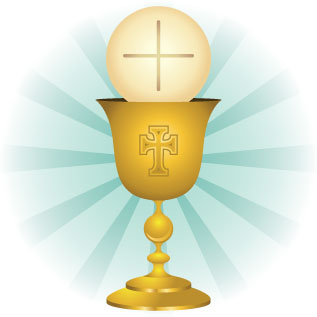 To continue from the last SPRED post, the day of Communion came. We were all so nervous about our friends and whether they would be able to get their Communion, or not. It’s all so touch and go with them.

X’s mother hadn’t eaten all day. His father seemed tense.  When X arrived, we wanted him to sit in the second pew, and that alone set him off. He parked himself in the first pew and would not move.  We decided to let him sit there and move to the first pew with him. There was still another 20 minutes until Mass would start, and X was fidgety. His parents sat on either side of him, the mother stroking his arm, the father rubbing his back. Then X start running around the church. We hoped he would calm down by the time Mass began, believing he could wear himself out over the next 20 minutes. When I could I prayed that he could finally receive his Communion. I noticed his mother and father deep in prayer during the moments in between tending to their son.

Y had been in the hospital for a few days, was released, but according to his Mother, he was still “acting up.” The plan was to bring Y, but stay with him out in the lobby and bring him up at the end of Mass, when everyone else would get their Communion, then usher him out.

As a SPRED group we were also debating whether we could continue to work with Y. Would we be safe with him? We are eight adults working with five friends, ages 11-17.  Only one of the eight adults is male, a retired policeman, not enough to handle Y if he should have another episode. The rest of us are women, generally older and not in the best of shape. If just one of us is uncomfortable, we would have to agree to let him go.

Mass started. When it came time for communion, X was escorted to the front by myself and his two parents. It looked like everything would go well. Father stood before X with his mother and father at each side, and offered Communion to X first. He took it without a hitch! Mom was in tears, and truth be told, many of us were moved to tears as well. Success! Who would have thought witnessing one child receiving his first Communion could be such an intense-filled moment?

With Y, we were not so successful. Y’s mother decided today was not the day as Y still did not feel well. He is still growing and the amount of medication necessary keeps changing, For now, we are waiting and praying for a future date.