I am passing along this information written by the Association of Lithuanian Jews in Israel, as I stand in solidarity with their position. I will be thinking of their demonstration this coming Friday. Please join me in getting the word out.

We invite you to join us in a demonstration across the street from the office of the Lithuanian Embassy in Israel,12 Aba Hillel, Ramat Gan: Friday, 24 January 2020, 11 a.m. 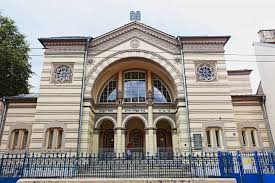 Your participation is essential to all of us – we must convey a clear message to the Lithuanian Government and its elected officials that we shall do all that is required to stop immediately the racist and anti-Semitic resolution declaring that Lithuania has no responsibility for the murders and extermination of Lithuanian Jews during the Second World War. This resolution harms the memory of Holocaust survivors and families of those 240,000 Jews killed in Lithuania during the Holocaust.

In two months the Lithuanian Parliament will recess. Prior to that MP Arūnas Gumuliauskas, chair of the parliament’s Commission on the Fight for Freedom and Historical Memory, will propose a parliamentary resolution declaring that Lithuania has no responsibility for the murders and extermination of Lithuanian Jews during the Second World War because it was occupied by Soviets and then by Nazi Germany. His resolution is to absolve Lithuania from horrors of the Holocaust because it was occupied by Russia and Germany!

Parliament member Gumuliauskas is not clearly anti-Semitic (of those living in Lithuania) – he is a professor of history. His primary research during the Soviet era made a positive impact of the Communist Party on the Lithuanian theater. Apparently in 1987 he did not think that in three years hence everything would be turned upside down: instead of praising communism another change should be found – in order to stand out and pave his way to parliament Jews can always be accused of something.

Anti-Semitism has always been popular in Lithuania at all times. In 2016 the learned professor was elected to parliament. At the end of this year there will be another parliamentary election and an opportunity for him to stand out by proposing a parliamentary resolution that releases Lithuania and Lithuanians of involvement in the Holocaust, for the murder of 95% of Lithuanian citizens of Lithuania who had lived as good neighbors with Lithuanians over 400 years.

During the Holocaust Lithuanian killers were so “superior” in their work that other Lithuanian Jews from other Eastern European countries were brought to Lithuania to be murdered. It is easy to murder defenseless babies and women. The cruelty of the Lithuanian killers was at a level that shocked even veteran Nazi SS officers who were experienced in murdering.

In the first months of the Nazi occupation, most of Lithuanian Jewry was annihilated by the Lithuanians, and from the previously published information, over 22,000 Lithuanians participated in and carried out the murders in 214 places in Lithuania. Some of them advanced and subsequently served the Nazis as guardians and murderers of the Jews in concentration and extermination camps, including in Auschwitz.

At what stage does the new anti-Semitism in Lithuania want to vote on a parliamentary resolution that distorts history. The black stain will always be remembered and cannot be cleansed by any resolution!

Murderers cannot be heroes in any democracy.

Public figures and the government of Lithuania are silent – no condemnation, no demonstrations. Silence is the same as a stamp of approval. The heads of state of Lithuania are unwilling to address the essence of the situation and say that since a proposal has not been registered in parliament, at this stage there is nothing to address.

Is the enlightened world ready to accept this explanation of silence from the Lithuanian Government?

Once the proposed resolution is made, we will not be able to change it. We must act immediately without delay to repeal the proposal and must do so with all our might and power.

The beginning of Fascism began with the same method in Germany in the early 1930s and even then no one tried to stop the growing activity of anti-Semitism. Learn from the Nuremberg resolutions at that time. The many who were silent then could have made a difference. Silence = approval.

Invite to the demonstration friends, relatives, and people who care about anti-Semitism and who want to see the world more beautiful and a better future for our children.

ASSOCIATION OF LITHUANIAN JEWS IN ISRAEL